The Washington State Legislature passed some of the nation’s most stringent police reform laws in 2021. The laws significantly changed how police services are delivered across the state, including when officers may legally use force.

The effort was well-intentioned, but there were some unintended consequences that adversely impacted our efforts to combat crime, help people in crisis and respond to calls for service in general. The legislature corrected several of these unintended consequences in 2022, by adding definitions to the law and by further clarifying and expanding the lawful use of force.

The Fife Police Department quickly and thoroughly trained our officers and adopted policies to comply with the new laws. While we are still adjusting to the changes and addressing the unintended consequences from 2021, we are well on our way to reestablishing a more robust response for our community, especially our response to criminal activity and people in crisis. To that end, we are committed to ensuring public safety for all.

To our Fife Community:

In 2021, our State Legislature enacted several bills related to law enforcement. The majority of the police reform bills went into effect on July 25, 2021, and have required changes in how we will deliver police services.

Fife Police will continue to respond to any call for service that involves a threat to “life safety” issues. The calls that are most likely to be impacted are those calls that involve no crime at all.

These can include, but are not limited to:

While this list is not exclusive, it is also not concrete.  We will rely on our supervisors to assess calls and determine if an in-person or other type of response is appropriate under the new laws, or if the call should be shifted to another non-law enforcement entity.

The Fife Police Department is committed to ensuring safety in our community. How we provide that safety and how we resolve issues moving forward has been drastically impacted by the new laws that have taken effect. We appreciate your patience and understanding as we work through these changes and our officers navigate their new environment. If you have concerns or questions about this new legislation, I urge you to contact our 25th district legislators directly.

For more information, and to familiarize yourself with how the new laws affect the Fife Police Department, please see our summary of legislative changes below. 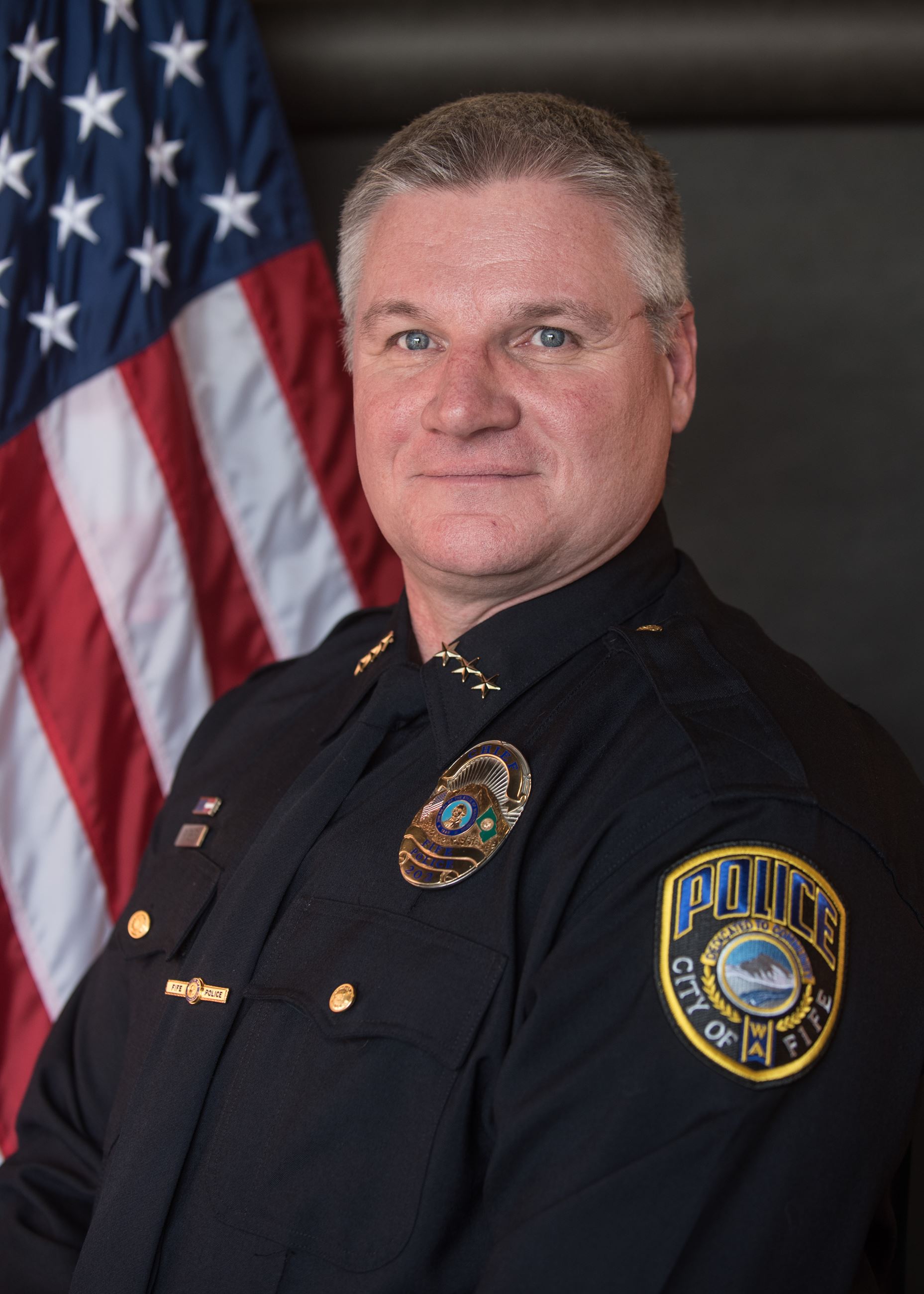 CHAT WITH THE CHIEF: EPISODE 5

Fife Police Chief Pete Fisher has a regular video series called Chat with the Chief. Episode 5 features a special guest. Mayor Kim Roscoe joins Chief Fisher to discuss recent police reform legislation in Washington. The conversation takes a deep dive into how the Fife Police Department is adapting to the new legislation. Want to view the entire library of Chat with the Chief videos? Visit https://cityoffife.org/fifepdcomms.

Prohibits the use of a chokehold or neck restraints

Definitions: "Chokehold" means the intentional application of direct pressure to a person's trachea or windpipe for the purpose of restricting another person's airway. "Neck Restraint" refers to any vascular neck restraint or similar restraint, hold, or other tactic in which pressure is applied to the neck for the purpose of constricting blood flow.

Fife Police Department policy was already in line with the changes on chokeholds and neck restraints.

Limits vehicular pursuits and prohibits them unless the officer has probable cause that a crime (violent or sex offense) has been or is being committed. Or, there is a reasonable suspicion of DUI and other stipulations

Over the past few years, the Fife Police Department's Pursuit Policy had become more stringent, limiting pursuits to felony crimes of violence. Some minor adjustments in our policy were made to ensure Fife PD is in compliance with this new legislation. Given the changes in the law regarding police pursuits, any pursuit by a Fife Police Officer should be very rare.

The Fife Police Department was already in line with this change. FPD Policy 300.4.1 states: "An officer should only discharge a firearm at a moving vehicle or its occupants when the officer reasonably believes there are no other reasonable means available to avert the imminent threat of the vehicle or of deadly force other than the vehicle that is directed at the officer or others (Chapter 320 § 7, 2021 Laws). Officers should not shoot at any part of a vehicle in an attempt to disable the vehicle."

Bans use of military equipment

Use of physical force is more limited

Officers can only use force to overcome actual resistance

Tools and equipment are limited

A police officer may use force in these circumstances:

HB 1310 has greatly reduced the incidents in which officers can employ force and the manner in which they apply that force.

Prior to this Bill, officers were authorized to use force to make an arrest, enforce an investigative stop, detain a person for their own safety, the officer's safety, or the safety of another, to detain juvenile runaways and to take a person into protective custody if they had a mental health issue that would result in an involuntary commitment to a hospital of mental health facility.

Under the new law, officers may only use physical force when necessary to protect against criminal conduct when:

•There is probable cause to make an arrest;

•To effect an arrest (arresting someone on a warrant);

•To prevent an escape as defined under RCW 9A.76; OR

•Protect against an imminent threat of bodily injury to the peace officer, another person or the person against whom force is being used

Definition: An "imminent threat" means it is objectively reasonable to believe that a person has the present and apparent ability, opportunity and intent to immediately cause bodily injury to the officer or another person.

This means that an officer may not use force or chase a subject that is suspected of committing a crime, cannot use force for investigative detentions unless there is imminent danger and may no longer use force to detain a subject for mental health treatment unless there is imminent danger. These restrictions and burdens are far more restrictive than the previous standards and the current federal standards on police use of force. As such, it has necessitated a change in what and how we as a police department respond to certain types of calls.

This law was created in response to a Washington Supreme Court Decision:  State vs. Blake.  In this case, it was determined by the State Supreme Court that the state drug crimes law was unconstitutional because it created strict liability when it did not require proof of a mental state, i.e., knowledge. This law added the word “knowingly” to the Unlawful Possession of a Controlled Substance statute and established certain criteria for charging subjects knowingly in possession of drugs for personal use.

Officers have a duty to intervene

Officers have a duty to render aid

Officers have a duty to report by any officer who witnesses another officer using or attempting to use excessive force. The officer has a duty to intervene to end and/or prevent the use of excessive force and report to their supervisor

The legislation empowers and encourages officers to report misconduct

To qualify for this defense, a law enforcement officer must now prove beyond a reasonable doubt to a fact finder that:

The felony conduct was a proximate cause of the injury

An officer must now raise this defense at trial, as opposed to summary judgment

The state would need to argue a rational basis for this disparate treatment, i.e., police reform

The Office of Independent Investigations is authorized, but not required, to conduct investigations regarding the use of deadly force, “or other incidents,” by a law enforcement officer

The investigations cover “in custody” (“under physical control”), or out of custody cases

Per the intent, the office should not be recommending criminal charges or a finding of administrative policy violations

Will refer the investigation to the prosecutor to determine if the action was justified, or whether criminal charges will be filed

The Washington State Auditor is authorized to conduct a process compliance audit procedure and review of any deadly force investigation occurring after February 4, 2019

The auditor will determine if the law enforcement agency, investigative body, and prosecutor’s office are in compliance with RCW 10.114.011

The auditor is also authorized to conduct an audit procedure on any law enforcement agency to ensure the agency is in compliance with all laws, policies, and procedures governing the training and certification of officers employed by their agency

Fife PD is already capturing this data, but will be updating to reflect changes